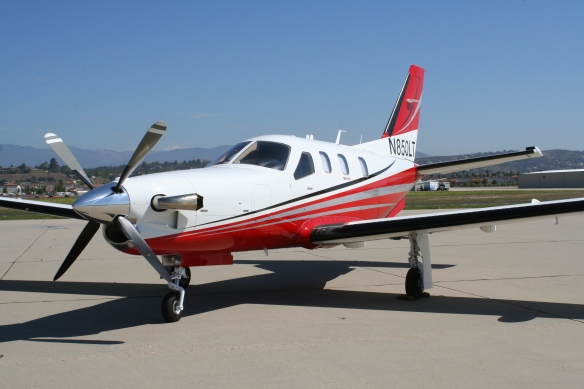 N850LT arrived here at the AVEX hangar in Camarillo, California coming to us all the way from France on July 29, 2011! SN 585 is the newest of the TBM 850 fleet. While every TBM 850’s transatlantic crossing is an adventure, N850LT made a special stop on her maiden voyage, flying in to Oshkosh just in time for Socata’s 100th anniversary party, celebrating a century of continuous aircraft manufacturing. The celebration even included an air race between a TBM 850 and a P-51 Mustang! The celebration at Oshkosh is not the only thing that Socata is doing to commemorate their centennial, they are also offering a limited time Five Year Zero Scheduled Maintenance  Cost Warranty for the 2011 TBM 850.

Terry Winson, AVEX Director of Sales, departed Oshkosh at 7:17AM CDT and landed in Denver at 9:23AM MDT. He continued on, departing Denver at 10:58AM MDT and arrived back here at AVEX at 1:01PM PDT. Terry and N850LT covered more than 1800 statute miles in a half day!